The workshop “Markets for Collective Concerns?”1, that we co-organized, was held at Copenhagen Business School last December 11th and 12th. These brief notes are not a summary. It is our attempt to start digesting the vertigo we still feel about the important questions and challenges for future social and STS inspired studies of markets that were posed during those two days. We will, hopefully, be able to produce a clearer statement of these issues in the expected edited publication collecting the contributions to the workshop. 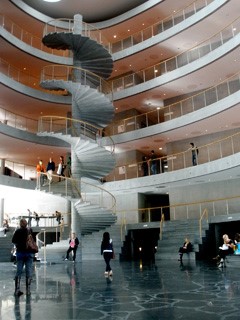 The title of the workshop referred to markets that are created not only to ensure economic exchange, but also to deal with specific collective concerns -e.g. poverty, energy supply, and global warming. Markets developed as policy instruments.

One such example is discussed in the paper presented by Liliana Doganova and Brice Laurent that compared the implementation of two different European policies. Interestingly, the comparative exercise showed a great deal of variety from a seemingly similar starting point, namely “realizing European sustainability objectives with markets”. Or, consider Peter Karnøe’s presentation of the successful growth of wind power within the energy sector in Denmark. Albeit cleaner, the fluctuating characteristic of wind poses problems to energy planning. In order to solve these problems (or more generally, to foster competition and increase sustainability) policy makers have introduced market exchange. However, as one of Karnøe’s students, Rasmus Ploug Jenle, nicely elaborates in his forthcoming PhD dissertation, energy planners in Denmark now face a double challenge: they need to simultaneously harmonize the equilibrium of electricity and of the market.

The ambition of the workshop, however, was not just to confirm the neo-liberal trend – of markets challenging bureaucracy as the favored mechanism by policy makers around the world – but to initiate a conversation about what happens when these “markets for collective concerns” do not work as expected.

Daniel Neyland, for instance, gave a presentation of the implementation of a recycling scheme in the UK, which did not only include a complicated array of private and public organizations, but also featured a pollution right exchange mechanism to coordinate them. The exchange, however, didn’t work as expected. Not only, it didn’t coordinate well but it brought its own side effects. Notably, the speculative behavior of some of the exchange parties jeopardized the whole arrangement. Neyland argues that more empirical attention should be paid to the practicalities of market failure, to study the ways in which markets are evaluated and the arguments that are mobilized to repair and eventually cancel them. In the language of recent ‘valuation studies’, it is not only that market agents and goods are continuously valued and re-qualified, but markets (for collective concerns) themselves are made objects of valuation. But, such valuations do not refer only to ‘economic efficiency’, but also to the collective concerns to which they have been attached. The key question here is then how, and by whom, are markets for collective concerns evaluated?

Consider Daniel Breslau’s work on the energy sector in the US. Unlike many other countries, where electricity was provided by state owned firms, in the US electricity generation and distribution have for long been on the hands of private companies clustered on geographical regulated monopolies. The liberalization reforms carried out in the last decades, which introduced market mechanisms to challenge existing monopolies, in turn created new challenges. However, unlike Neyland’s case study where the exchange was eventually canceled, Breslau illustrates how the failure of market oriented reforms has led to the emergence of an active field of market experts in competition for providing the official version of the market’s problems – not to mention the futures they may provide. Breslau’s research shows a case where the failure of a market policy does not lead to a non-market mechanism, but instead to market repair, thus consolidating the role of markets as mechanisms to deal with collective concerns. During the workshop many of us (when considering our respective empirical sites) agreed that the situation just described is becoming the norm rather than the exception. Explaining how and why this is happening is no doubt one of the main empirical challenges for the study of markets for collective concerns.

Fortunately, Phil Mirowksi (2013) has already studied some of the intellectual and political roots of this movement. Historically, the notion of ‘market failure’ has been used by neo-classical economists to justify political or regulatory interventions in markets: taxes to deal with externalities, anti-trust regulation to avoid monopolies, or regulated monopolies for public goods. This view, however, was seriously challenged by the work of Ronald Coase (and of other Chicago School economists more generally). The most radical example is, of course, C02 markets. Here, instead of introducing taxes or directly banning some particularly harmful activities, the collective concern of reducing C02 pollution is dealt with through the introduction of markets where pollution rights are exchanged. However, Mirowski explains, the consolidation of markets as social policies is not only related to right wing or conservative economists. For sure, relatively left wing economists, such as Stiglitz, have openly criticized unregulated marketization. However, what economists like Stiglitz (or to name another more recent example, Alvin Roth) initiate when they are asked to participate in policy making, is not necessarily a move toward a non-market arrangement or policy, but rather – as Breslau showed for the electricity industry – to compete for providing their favored solution.

As Mirowski noticed some years ago, the turn to market repair and design has been one of the most relevant, although not always noticed, transformations in economics in the last decades. In his words: “One of the great challenges for intellectual historians of the future will be to explain how it came to be that a professional academic orthodoxy that had eschewed most considerations of the specificity of markets […] then neatly negotiated a 180º turn, and managed to convince a broad array of outsiders that they possessed special expertise to construct all manner of actual usable markets, tailor-made for their narrowly specified purposes” (Mirowski 2007: 218).

As readers of this newsletter probably know very well, markets and market failures are not new research topics within STS. The most influential available formulation has been developed by Michel Callon. We, certainly, do not deny the huge influence of Callon’s work, but we believe the failures of markets for collective concerns open at least three important challenges to the ongoing research agenda on markets in STS.

In the introductory chapter of The Laws of the Markets, Callon suggested that economic knowledge does not only represent markets, but frames them. Economics is performative. Callon’s performativity thesis is presented as a change of the epistemological relationship between social scientists and economists. It is not only that economists describe things differently (and probably wrongly), but they practically act in making markets. Rather than observing the economy from an outside vantage point, economists – like any other technician – participate in the practical construction of their object, becoming therefore, very good objects for STS attention. We argue that in the face of an increased professionalization of market design, performativity simply loses its radicalism: instead it seems to repeat what economists, like Roth and other know very well2, namely that they repair and design markets. Therefore, if the description we (as social scientists) provide is that economic knowledge perform markets (for collective concerns), we seriously risk being redundant. The question is therefore: how should we approach experts in markets for collective concerns?

A reflection in this direction was formulated by Annelise Riles. Riles’ ethnographic objects are not economists but lawyers. Lawyers, like economists turned market designers, do not need to be told they practically make and organize markets. It is in their job description. What can social research focusing on their work then add? In her presentation, Riles explored one possible solution when she talked about her recent experimentation with fieldwork where the fiction of informant / informed is replaced with collaborative platforms3. This type of method is, of course, not free of new challenges. As Riles elaborated in her Q&A, collaboration can be associated to both the hype of the collaborative economy (and its related issues of non-recognized unpaid jobs or dubious commercial strategies) and the collaborateur that loses any critical distance. A more classic alternative was offered by Nicholas Gane. In the context of his recent work on the entangled history of economic and sociological thought, Gane’s presentation described the intellectual history of the notion of competition. Gane not only defended the need to learn what classic social thinkers such as Simmel and Weber taught us about competition, but also to rescue the rich but sometimes forgotten tradition of social thought that directly address and challenge economic reasoning. Thinkers, like Weber, were not only arguing against some of the most influential economists of their time, but were also greatly influencing or opening issues that needed to be dealt with by the economists that followed them. Gane urges us to learn from their experience.

b. Are markets for collective concerns ‘calculative devices’?

In Callon’s original piece, markets are understood as a particular type of outcome: markets are situations where calculative agents can choose among passive goods and clearly distinguish future states. However, as Mirowksi compellingly showed in his talk, economists seem to have an appealing ability to use the same term meaning radically different things with it. Take the market as an example; to neo-classical economists, markets efficiently coordinate the circulation of existing goods through competition, whereas the market of Hayek was a knowledge making mechanism based on price signals. The market for someone like Roth does not even require prices, but two sides willing to accept a centralized mechanism enabling them to choose. These and many other notions of markets are mobilized when evaluating or repairing markets for collective concerns. But, rather than settling for one definition, market makers and designers seem to deliberately keep the ambiguity. A new challenge for STS scholars is therefore to follow the specific notions or conceptions of markets that are mobilized or eventually compete in a particular market controversy (Frankel 2015). In this context, perhaps rather than associating the market with a particular type of social interaction (calculative agents and so on) as Callon does, markets for collective concerns can be approached, as another STS scholar Annemarie Mol has done in her work, as arrangements that are differently enacted by different experts and practices.

In the closing chapter of the Laws of the Markets, Callon blurred the distinction between well-functioning markets and market failures by introducing the framing/overflowing couple. In an article published eleven years later, Callon suggested that arrangements such as CO2 markets can be understood as part of collective hybrid forums where undefined issues are problematized in economic, political or technical terms. In this context, Callon introduced the notion of “civilized markets” to suggest that markets can be turned into quasi-democratic forums, where different types of concerns are heard

and internalized. As it was discussed in the workshop here reported, that markets are increasingly attached to collective concerns does not necessarily mean that they are being turned into increasingly democratized forms of participation. On the contrary, there seems to be an increasing ‘techno-cratization’, where markets for collective concerns are granting economists or expert market designers the responsibility of reformulating public concerns and suggesting their solution.