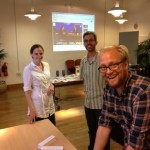 Mattering Press is a new book publishing initiative committed to the creation and publishing of widely accessible, carefully produced, and intellectually vibrant books in Science and Technology Studies (STS). Our first books are due to be published
in 2014. In September of this year we had the opportunity to introduce the press at a reception held at the annual conference of the Centre for Research on Socio-Cultural Change (CRESC) in London. In announcing the press in this setting, we were supported by both EASST who generously contributed to the funding of the running costs of the press this year, CRESC who offered us the opportunity to present the press, alongside other academic publishers, and two further partners: the Centre for the Study of Invention and Social Process at Goldsmiths, University of London and the Hybrid Publishing Lab at the Centre for Digital Cultures at Leuphana University.

Mattering Press started in early 2010 as a publishing initiative of the Flows, Doings, Edges collective: a peer-support group of early career researchers interested in relational research. Sensitive to the relational and material politics of knowledge production, in early 2012 we began to explore the possibilities of alternative modes of engaging with works we find interesting and important. The term ‘mattering’ comes from Science and Technology Studies, and captures at least three important components of our thinking about Open Access publishing.

These are the concerns that we hope Mattering Press will be able to hold in focus as part of a growing and ever-changing STS community, and as part of an active initiative to reflect on and innovate around our own knowledge production practices. Informed by these points, Mattering Press is organised around the following three sets of practices, each of which in turn draws on our ongoing thinking about what new relations more careful modes of academic knowledge production might produce.

Our presentation at the CRESC conference reception marks the moment when Mattering Press announced itself to some of its potential publics. Next year, we look forward to an official launch of the Press. Our first batch of books will include a collection of essays provisionally titled Practising Comparison: Revitalising the Comparative Act, edited by Joe Deville, Michael Guggenheim and Zuzana Hrdlickova, a collection of essays provisionally titled The Empirical Baroque, edited by John Law and Evelyn Ruppert, and an English translation of a book by a major STS scholar, which we hope to be able to announce soon. It is expected that our second batch of books, to be released in 2015, will include several texts by promising early career researchers. In the meantime, you can find us at: www.matteringpress.org

One thought on “Mattering Press: New forms of care for STS books”