What is a scientific author? What are the different practices for making-up this elusive figure, and how do these connect? Are current modes of enacting authorship still fit for purpose and how might we imagine and enact new forms?

What is understood as ‘authorship’ has varied over time and contexts yet is relevant across all fields of scholarship and science. This multiple figure is deeply interwoven with cognitive aspects of knowledge, such as creativity, originality, and invention, as well as with the institutional aspects of knowledge production, such as reward-systems, ownership and recognition. Authorship is also very much at the centre of ethical considerations in science and scholarship. Questions such as what is an appropriate contribution that warrants authorship, or how are authorship practices affected by increasing competition are of both practical and political importance. Moreover, authorship is linked to communication technologies and social networks: writing a scholarly letter for a print journal differs in important ways from authoring a submission on a Wikipedia page.

These manifold dimensions of authorship have rarely been brought together or mobilized to better understand and rethink authorship practices. With this in mind, in February 2015 a five-day workshop named Authorship in Transition was held in the city of Leiden, the Netherlands. Commissioned by the prestigious NIAS-Lorentz Program((http://www.lorentzcenter.nl/lc/web/2015/690/info.php3?wsid=690&venue=Snellius)) and organised by Anne Beaulieu, Blaise Cronin, Frank Miedema, Sarah de Rijcke, and Paul Wouters, the event stimulated critical insights into authorship dynamics but also opened-up spaces for imagining new formations.

Many recent discussions about authorship have focused on two important issues: fraudulent authorship, and possible perverse effects of evaluative metrics. Without ignoring ethical and political matters, our workshop took a different starting point, considering the changing conditions and practices of authorship and the need to understand these in a grounded way. This requires posing some challenging questions, which touch the core of contemporary definitions of authorship and its practice. For example, to what extent does it still make sense to think about authors as autonomous individual subjects? Are more radical innovations in authorship practices thinkable and desirable? What are the implications for the reward and reputational system in science and scholarship? To what extent do we need new forms of quality control if scientific instruments are starting to play a more autonomous role in the creation of knowledge? What are the consequences for the organization of labour in research of highly distributed teams of authors (Beaulieu et al., 2012)? And what would the near future of scientific writing look like in a scenario analysis (Davidson & Goldberg, 2010)?

These are large, wide-ranging and challenging questions that justify a broad research program. Our workshop was intended as a first step in formulating such a program. In appreciation of the richness and complexities of the topic, participants assembled from academia, but also other key players in the scholarly authorship process, such as editors, publishers, evaluators, representatives of university libraries, science policy advisors, research information system specialists, and non-academic authors (performance artists, media specialists). 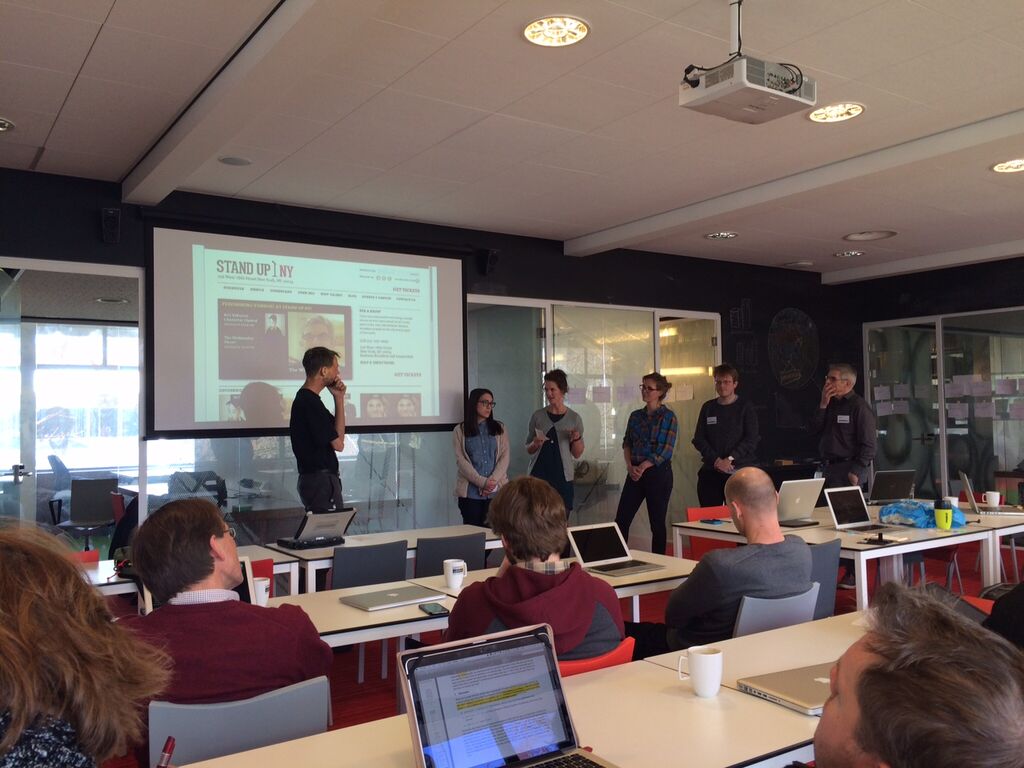 During the week, each day discussions were loosely organised around a particular dimension, so that interdisciplinary exchange could take place in a concerted way. These dimensions were: authorship as diverse practice, authorship as labour, authorship and reward structures, technological and material aspects of authorship, and politics and ethics of authorship. Besides sharing their expertise on the topic of authorship, workshop participants were also triggered to reflect on their own writing practices.

The highlights of each day were summarized daily, to make the most of the cumulative effect of these discussions in the final session of the final day, and in the follow-up to the workshop. A key material participant in this respect was the venue itself: whilst allowing for traditional academic exchanges, the Lorenz Center’s creative interior design features afforded a perfect setting for stimulating bottom-up thought spaces (‘think pod’ work spaces, walls to be written on, ample rooms to split-off into group work). 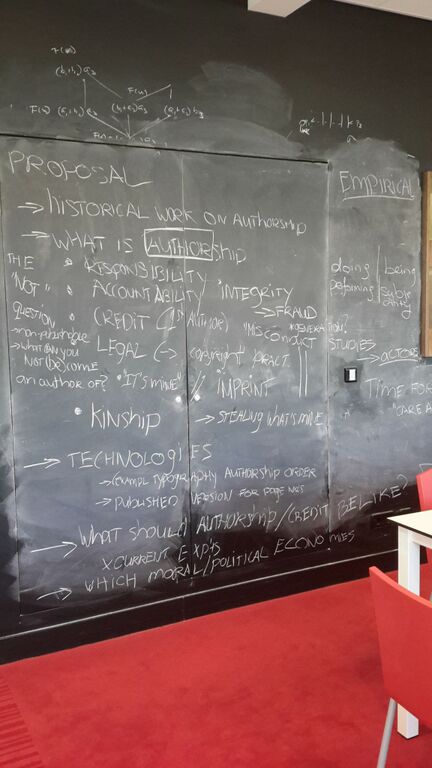 The event made visible a number of developments and problems circulating academic authorship in the present time. We heard throughout how audit explosions in universities and the measures and tools used to facilitate evaluation processes have performative effects in the shaping of research (cf. Rushforth & De Rijcke, 2015). This raised important political questions regarding how authorship is counted, and by extension, what forms of authorship count? Scientometrics, for example, performs authorship through counting names that have been archived onto specific digital databases. Vincent Larivière (University of Montreal) reminded us how this field offers a powerful descriptive tool through which to monitor shifts in authorship practices across fields of inquiry and regions over time. However enacting authorship through these elaborate counting systems has performative effects in extending the reach and intensity of formal academic evaluation. The talk by sociologist David Pontille (Centre de Sociologie de l’innovation, Mines Paris Tech & CNRS) related how authorship emerges through technologies of attribution, including a number of artefacts for naming individual contributors and corporate entities as well (cf. Pontille, 2008). In contemporary big science biology and physics the complexity of tasks appears to be increasing and therefore so too the numbers of authors. The proliferation of so-called hyperauthorship in biomedicine (see the infamous ‘fruit fly’ paper recently reported by Nature((http://www.nature.com/news/fruit-fly-paper-has-1-000-authors-1.17555))), provokes uncertainties in the attribution of credit, priority and authority, not to mention ethical issues of responsibility. Also drawing on anthropology of writing, Tjitske Holtrop (University of Amsterdam) recounted the instabilities in infrastructure and expertise which emerged in administrative report writing in the turbulent political and geographical context of the Dutch military’s involvement in Afghanistan during the 2000s. Returning to academia, Ruth Müller (TU Munich) reported how the premium placed on first (and last) authorship berths in the institutional and epistemic reward systems of the life sciences was transforming social relations in labs, putting particularly strain on those occupying post-doc positions (cf. Müller, 2014). Maarten Derksen (University of Groningen) told of how recent high profile exposes of fraud and plagiarism have tended to implicate authorship systems – and their excessively tight coupling with individual scientific careers and rewards – in their explanations. Various developments in knowledge making, and limitations they expose in modern authorship techniques, have led certain actors to attempt solutions. Examples of collective responses to crises of credit and trust include attempts to create innovative authorship modes like ‘contributorship’, first launched in the nineties in biomedical sciences, and more recently crowdsourcing, which seek to accommodate new frontiers whilst also preserving some established norms and routines. Such efforts appear to generate quite specific authorship functions that hitherto are barely reported on, let alone understood. How ways of counting authorship effect labour, class, and gender relations in different epistemic and institutional contexts are also key issues at stake.

Questions of which new authorship practices can emerge are intimately related to questions of how they will do so: imagining and cultivating new and emergent forms will depend upon the practices and politics of infrastructure building. One session introduced participants with Scalar, an open-web based platform, which explicitly seeks to transform authorship in the humanities and social sciences. The result of collaborations between academics, web designers, and university presses, Scalar provides a flexible means for open publishing that provides quite distinct set of features and affordances than physical and digital book formats. The platform was developed by the Alliance for Visual Networking Culture (ANVC), led by Tara McPherson (University of Southern California), with support from the Andrew W. Mellon Foundation. In the spirit of spontaneity the workshop sought to cultivate, Matt Burton gave an off-the-cuff presentation on Ipython Notebook, an interactive authoring platform for combining rich text, media, code, plots, and mathematics. As well as providing a practical demonstration of its interfaces, he brought into view path-dependencies surrounding scholarly infrastructure, such as the ubiquity of the PDF as a standard computer document through which ‘authorship’ gets circulated.

The format of the week placed great emphasis on group work, with participants each day splitting off into groups stimulating working on the production of new authorship interventions and platforms. These teams sought to imagine new ways in which authorship practices could be prised-open and done differently. For instance: one group produced the idea of The Authorshop, a web-based platform which makes available for free academic writing, thus circumventing academic journals and extortionate pay-walls. Initiatives like The Authorshop have potential to disrupt and improve the science system through ushering in better direction of public funds towards research, by calling on innovative quality control mechanisms to be developed, and by undermining the undue influence of indicators like the Journal Impact Factor in shaping scientific careers and evaluations.

The Authorship in Transition workshop enabled the authorship topic to trail off into multiple productive directions. The week has provided impetus for exploring further various branches of the discussions and findings, which we hope to translate into follow-up research projects, infrastructure-building initiatives and benchmarks for policy-makers and evaluators. One of the challenges will be to tease apart analytical dimensions of authorship, as it became clear throughout the week that the notion is so often entwined with reward, property, persona and voice – elements that matter deeply to scholars and researchers. The workshop provided a rich set of insights for further analysing contemporary authorship practices and stimulating opportunities to pursue modest interventions to re-shape this elusive but vital object.

We would like to express our gratitude to the Lorentz Centre for their generous funding of the workshop, and to the Netherlands Graduate Research School of Science, Technology and Modern Culture (WTMC), CWTS at Leiden University, the University Medical Centre in Utrecht, Open Access Publishing Services (OPuS), and the Rathenau Instituut for co-sponsoring the event.