The journal of the Danish Association for STS (DASTS) (www.dasts.dk)

Objective: to support the dispersion of STS research and be an outlet for upcoming and established researchers.

Articles and issues are published immediately after finished review process.

Editorial board is the board of DASTS

This is an attempt at an account on the emergence and ongoing bringing into existence of something as abstract as a journal. The account is anthropological in the sense that it attempts to describe the journal as relation and relational. The intention is to give an adequate account of the journals partial, multifaceted existence. It is an account in which the journal is both cause and effect of relations. It realizes and is realized. It is parent and orphan. Its genealogy consists of ambitions, persons, platforms – digital and other –, financial means (or lack thereof) and layers of work.

STS Encounters is the journal of the Danish Association of STS (www.dasts.dk). It is a digital journal only. It does not come out in print and hard copy and this is a central aspect of its existence. The journal is not a body without organs in the deleuzian sense as an unorganized assemblage of multiple parts. It is an organ of a partially or vaguely existing body. But still, its body consists of the digital and contrary to some writers, that suggests that the digital is pure essence and light as air (see for instance Brynjolfsson and McAfee 2014), we, as students of STS, have, if not a full understanding, then at least a well-developed sense of the fact that the digital indeed has a weight. We have a sense of the enormous amounts of energy, buildings, material and work required for the digital to be ‘light as air’. But it is this layered and seemingly lightness of the digital that realizes STS Encounters.

The work and effort required for a paper journal to come into existence, the bundling of articles into issues, the many deadlines entailed in production, the work required in having enough, but not too many articles in the ‘pipeline’, and of course in the end, the paper and the ink, has been either ‘cut away’ or been redistributed to the digital in relation to STS Encounters. As a ‘real’ hard copy paper journal STS Encounters would not have lasted the first quarter. It would probably not even have made it into the printing press.

STS Encounters was not coined in a spirit of high ambitions and expectations. Rather it was conceived as a journal that should be inclusive and broad and be an accessible outlet for upcoming as well as established researchers. It was conceived in the spirit of the field of STS, namely as multifaceted and inclusive and where differences are welcomed and generative. Differences are invitations to think with and to be explored, instead of something to be policed. On the webpage of STS Encounters it is stated (and here reproduced in the same font):

“The aim of the journal is to stimulate quality and collaboration in Danish STS research as well as to make Danish STS more visible nationally and internationally. In this context STS is understood as a broad and interdisciplinary field. Encounters encourages submissions from all relevant fields and subfields of social and cultural inquiry dealing with scientific and technological matters. The editorial board emphasizes that the journal is to offer a broad and nuanced view of the Danish STS environment. This applies to theoretical and analytical frameworks, choice of method and substantive empirical areas.”

But STS Encounters is also an appendix. It is the journal of the Danish Association for STS (DASTS) which was founded in 2002. STS Encounters and DASTS are mutually parasitic and co-constitutive. As Bruno Latour argues, ontology is not binary and a matter of existence vs. non-existence, instead objects/subjects/actors/ come into existence and they may be partially existing or have fluctuating levels of existence (Latour, Bruno 2000). DASTS and STS Encounters gain existence through their mutual association. DASTS achieves existence as a national association by also having a journal and STS Encounters is not ‘only’ a journal, but the journal of the Danish Association for STS. The point being that different elements: an association with a board, a yearly conference, and a journal, are mutually co-constitutive community producing actors.

Going deeper into the genealogy of the journal thus implicates DASTS. DASTS was established as a platform for Danish STS research in the beginning of the 2000, at a point in time where STS was well established internationally, but still also a young and growing field. In Denmark at this point, STS research and teaching were scattered and took place only in corners of some of the universities in Denmark. There were no educational programs dedicated to STS. STS lived its life as subparts of programs taught and promoted by a few teachers and researchers around the country. But then these few people started talking to each other and they convened and decided to make an association, DASTS. This was taking place in an academic and political climate in which alliances, visibility and research strategies was becoming increasingly important given that basic research founding was being replaced by neoliberal principles for delegating research funding. But it was also simply a consequence of an experience of being associated with a field that was forming and being articulated. In the 00’ of the new millennium, people began to say and refer to STS in a somewhat monolithic sense and thus performatively articulate the field as well established and felt interpellated by others saying and doing “STS”.

The founding people, according to this author, was a few tenured researchers from Aarhus University, University of Copenhagen and the Technical University of Denmark. Among others, these were: Randi Markussen, Finn Olesen, Peter Lauritsen, Lene Kock, Christian Clausen and Ulrik Jørgensen. These established researchers were flanked by a group of upcoming scholars: Torben Elgaard Jensen, Julie Sommerlund, Signe Vikkelsø, Maja Horst, Casper Bruun Jensen, Henriette Langstrup, Klaus Høyer, Brit Ross Winthereik, Kristian Hvidtfeldt Nielsen. And further on there was a group of students and aspiring scholars, which among others included the author of this account and the members of the board of DASTS today. Many others could be mentioned and the general experience to this day – for better and for worse – is that the Danish STS community may be best described as “a party of cousins”.

In sum, DASTS and STS Encounters has grown out of an intellectual milieu and climate that can perhaps be described as a combination of the principle of the least effort, a strong sense of community and the will to – with no to little funding – build platforms that support a broad and inclusive, publicly engaging and intellectually stimulating research community of practice. As a consequence, the rate and amount of publications has always been uneven, with quiet periods. STS Encounters is indeed a percolating outlet and not a steady stream of publications. But of course, this has over the years also entailed a continuous concern with submission activity

“…Let me begin right away with my point. Researchers must love their material to produce good research. Science studies researchers must get inside the science, learning to appreciate it with the passion of an insider. This is the mainly unrealized gift of anthropology to science studies. Immersion produces insight. Reifying theory as a higher life form gets in the way of love. Theory is a tool kit. We need to love our tools as they help us make things, not for themselves.” (Excerpt from the introduction).

“..In the call for participation the ubiquity of screens was described as one of the reasons cultural/media studies, design studies, science and technology studies, information studies and anthropology ought to be interested in this topic empirically and analytically. It was suggested that screens play an increasingly central role in a wide range of human practices relating to work, play, travel, care, learning, planning, monitoring, designing, coordinating and much else.” (Excerpt from the introduction).

Svendsen, Mette N.: The “ME” in the “WE”: Anthropological Engagements with the Personalized Medicine

“…What has spurred discussion is the government’s suggested organizational and ethical framework for collecting, banking, and using genomes from the Danish people as part of its realization of personalized medicine in Danish health care. The framing of “stealing” and the articulation of this project as “high risk” points to the discussion’s central issue of how to treat and administer genomes as concomitantly part of the “me” of the person and the “we” of the welfare state.” (Excerpt from the introduction).

“… In this article, I engage a key claim of Ulrich Beck’s theorizing of global risks, to the effect that socio-political collectivities are currently being re-imagined through the anticipation of endangered long-term futures. Such dynamics of temporal reordering are visible, the article shows, in the imaginative politics of climatic projections.” (Excerpt from the abstract)

”…This article introduces a devicecentred approach to the concept of climate engagement through a qualitative analysis of two websites: www.klimabevidst.dk and www.mapmyclimate.dk. While klimabevidst.dk represents a down-to-earth take on individual engagement with the climate, providing users with hands-on guides to green home improvements, www.mapmyclimate.dk seeks to increase the user’s awareness of the phenomenon of global climate change by demonstrating how the user’s actions impact the earth’s future.” (Excerpt from the abstract)

Age: Work, Progress, and Prosperity in a Time of Brilliant Techno-

Latour, Bruno. 2000. “On the Partial Existence of Existing and Non- 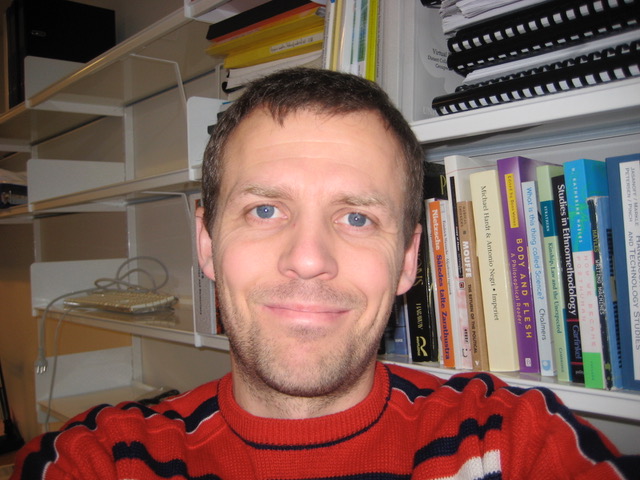 Peter Danholt (PhD) is associate professor at Information Studies, Aarhus University. His research is on the transformative aspects of science and technology in healthcare practices, organizations, design and daily life. His research draws theoretically and methodologically on STS, feminism, post-structuralism and actor-network theory. Peter Danholt is vice president of the Danish Association of STS (DASTS), chief-editor of STS Encounters and Head of the Centre for STS-studies, Aarhus University.

My peace letter to #SARSCoV2: "Like other 74 million specimens of homo sapiens in the world as of today, I have been chosen by you as a site for experimentation and discovery". Because we are not at war, despite the price we are paying http://www.annalisapelizza.eu/peace-letter-to-sars-cov-2/ #COVID19 #stscovid19

The Corona Truth Wars! My commentary is out: in this perfect post-truth crisis, what information is reliable? Which experts should we follow and what (epistemic) authorities should we trust? #coronavirus @STS_Journal #STS #STScovid19 #ConspiracyTheories