My own interest in this exhibition

Having only witnessed Bruno Latour live in a lecture over two decades ago and having recently (re-)read a large fraction of his work, including his Inquiry into Modes of Existence (2013), I gladly accepted the invitation to take part in the opening event of his exhibition Reset Modernity! My own interest in Latour’s work, including his philosophical work, stems from his combined empirical and theoretical analyses of practices of dealing with uncertainty. Besides having studied Latour’s approach to science and politics (in particular pertaining to global climate change) I was recently triggered by his approach to science and religion (in, e.g., his Rejoicing, 2013). I will here reflect how his exhibition added a useful dimension to the readings I had done before.

Latour’s approach in his books is already unconventional, for instance by using fictive narrators. In the exhibition, a whole other dimension of the problématique appears, through a variety of media, alongside what can be addressed through the ordinary mode of reading and thinking. During the opening symposium (and in the book accompanying the exhibition) Latour emphasised that in order to be able to deal with the future ‘our individual instruments’ need to be ‘reset’ (from a false modernity) by a sequence of ‘procedures’ that the exhibition carries out with the participants. And to be honest: I took a whole day to dutifully execute all the suggested procedures, using my guidebook and walking through the exhibition and looking carefully and reflecting on what was shown, and indeed got sensitised to several aspects that had escaped my notice from reading his books. This happened already in procedure 1, relocalising the global, when watching the precursors and Latour’s criticism of the film Powers of Ten (Charles and Ray Eames, 1977). I immediately ordered a copy of Kees Boeke’s Cosmic View: The Universe in 40 Jumps (1957). Latour highlights the ‘complete implausibility’ of the moves in Powers of Ten. One should not jump too quickly to the ‘big picture’. Or, as Latour writes, ‘Earth is not visible as long as it is hidden behind the globe’. Of course I was already open to it and quite prepared, but still the exhibition is accessible to a large audience (actually, it is more accessible than some of Latour’s books).

Another observation that Latour made during the opening was that none of the work in his exhibition has any form of irony: none of it is critical in the 20th century modernist sense. And he deemed that to be something positive. According to Latour, you do not want to exit from the successes of modernisation. And indeed the exhibition, although it addresses – among other topics – global problems such as climate change, embodies a pragmatist philosophy of hope. Indeed several pragmatist elements are recognisable in the exhibition: avoidance of dualisms; the flux of experience and of the experienced world; reflexivity; responsibility; creativity and inclusivity. The exhibition hence confirms that Latour’s work refers back to the early phase of pragmatism (that of James and Dewey) combined with a sharp analysis of present day connections.

The least attractive procedure, at least for my own project, was the procedure called ‘secular at last’ focussed on the crossing between politics and religion. The procedure focused on religious film and highlighted the politics of religion. While the crossing of politics and religion is no doubt a problématique of global significance, I had hoped to learn more about Latour’s analyses of science and religion, which he both sees as the result of transformations. In the case of science the interest is in information and representation; in the case of religion the interest is in translation and ‘saving’. In Rejoice, Latour had focused on alterations that happen to people when they utter religious speech and engage (models of) beings that ‘have the peculiar characteristic of bringing persons from remoteness to proximity, from death to life’. I would have liked to see demonstrations of how models of God are used in practice, and how deep uncertainty and ignorance about these models are dealt with and expressed in religious practices. And maybe to explore the crossing with the mode of reference, how science models nature.

To be honest, I have always been sceptical of references to ‘Gaia’. Especially of the popular reception of the Gaia hypothesis as it was put forward, defended and refined by the inventor and independent scientist James Lovelock (the hypothesis being that biota influence the environment in a way that causes a homeostasis in the face of a changing external forcing). While Lovelock and his supporters have consistently tried to accommodate scientific criticism of the Gaia hypothesis by seemingly getting rid of the metaphysical versions, the attractiveness of the Gaia hypothesis for the general public remained precisely what Lovelock cannot suppress himself to say about Earth: ‘It is most certainly an organism—and alive!’ Latour in this exhibition, however, does not at all allude to these metaphysical versions and is able to take a fresh look at Earth, in a grounded way. I found his visual distinctions between globe and Earth enlightening. And also what he indicated during the opening: speaking about Gaia is not about animism: it is to indicate that there was no modernist deanimation in the first place. 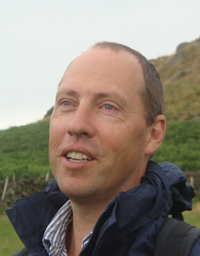 Arthur Petersen is Professor of Science, Technology and Public Policy at University College London since 2014. Before that he worked for more than 13 years as scientific adviser on environment and infrastructure policy within the Dutch Government, most recently he served as Chief Scientist of the PBL Netherlands Environmental Assessment Agency (2011–2014). He studied physics and philosophy, obtained doctorate degrees in atmospheric sciences (Utrecht University, 1999) and philosophy of science (VU University Amsterdam, 2006), now also finds disciplinary homes in anthropology and political science, and expects to finish his third doctorate – in science and religion – in 2019 (University of Oxford). Most of his research is about managing uncertainty.