I was initially apprehensive about taking part in the 4S/EASST 2016 conference in Barcelona. As a digital sociologist focussing on how web application based digital maps (such as Google Maps or Bing Maps) are engaged in everyday life, I had often considered my research to site at the oblique margins of STS. This belief was quickly dispelled with the opening plenary. There, the full diversity of STS was set out, and provided both reassurance and reaffirmation that my work does fit well within STS as a field. Meanwhile, many of the authors I had diligently read over the last few years were there in person, alongside many more I had never met or read. However, beyond the overarching benefit I gained from attending the conference, it was the Track 091 in which I was invited to speak that provided the most valuable experience.

As the title suggests, the focus of the track was on ‘exploring the role of materials in practices and sustainability’, a broad topic which led to some very fruitful theoretical discussion. Despite a wide variety differences in the approaches to research taken by speakers and a stunning array of substantive topics, there was an overall coherence across the talks. The success of which has ultimately led the track organisers to begin a process of collating papers from each speaker based on their talks, with the intention of submitting them for publication in a peer-review journal as a special issue. All the talks of this track can be located at: http://www.anglia.ac.uk/global-sustainability-institute-gsi/4seasst
Interestingly, the differences in approaches taken highlighted some clear divides on key underlying themes, raising important questions. For example, where Mandy de Wilde discussed the emerging smart meter monitoring of domestic energy consumption, she held borderline seams such as the boundary or neighboring walls of a property (spaces where the meter sits), as both social and material. Meanwhile, Shivant Jhagroe turned to the everyday temporal rhythms and routines of washing in the context of web 2.0 to argue that “…materials do not exist…”. That is, the social and digital are mutually constitutional and dialectic. As an underlying theme, this raised a question on how to treat materials which continued throughout the talks. For some, this was implicit in the methodology and for others it was discussed in the context of literature surrounding sociomateriality.

At the same time, the location of where to place the focus of study also informed several talks. In my own talk, I discussed the role of practice hacks as temporary workarounds that practioners employ in order to reestablish or maintain stable routine when limitations are met, enabling them to carry on in practical consciousness. Comparing these to breaching experiments in ethnomethodology, I highlighted the importance of focussing on the liminal space of change in social practices as a site of study. Likewise, both Marianne Ryghaug and Helen Gansmo, and Marius Korsnes and Jenny Bergschold focussed on participants that moved into a LivingLab, setting their sites of study as extended explorations of this liminal moment of change in practice. Taking this even further, Mia Rasmussen and Laura Nielson discussed purposefully bringing about change as an action-focused intervention in order to gain a better understanding of the enactment of materials. In contrast however, other speakers set their focus on the establishment and maintenance of routines instead. For Carolynne Lord, this entailed an understanding of how tablet devices are domesticated and engaged as new technologies by demographic groups of typically low intensity users such as elderly retirees. Similarly, for Toke Christensen and Els Rommes, a focus on ongoing engagement with social media platforms via personal digital devices by teenagers appropriated some key concepts from social psychology (without fraying into the realms of cognitivism or methodological individualism). Through several examples, they set out their participants’ passive-aggressive expectations of others, their anxieties of disconnection, and even forms of repetition compulsion as embodied tacit routines. In comparison, this diversity on where to explore practices left a second question hanging on the where to place focus – on the enactment of routines, on the maintenance of routine, or on moments of change to previously stable routine?

If the two underlying themes above centred on the role of materials in terms of their relationship to sociality and on how or where to focus on them, the third raised a simpler (albeit prior) question on what to consider as material. For some speakers, the notion of material was simple – it involves physicality. For example, Mandy de Wilde’s separation of material and social was only possible because the unit of analysis involved physical artefacts (solid walls, built structures, and smart meters). For others, the distinction was less clear-cut e.g., Toke Christensen and Els Rommes, Matthew Hanchard, and Shivat Jhagroe, with materials including virtual artefacts such as social media platforms, digital maps, and web applications. Here, whilst physical devices are used to facilitate or mediate access, the unit of analysis is more complex. Similarly, for Jens Lachmund and Richard Twine materials were far more slippery too. Focussing on veganism, Richard Twine described materials as both the assembled products (including packing and distribution chains) as physical artefacts and as the outcome of institutional systems of socio-material arrangement – classifying and ordering consumables into formal taxonomies. Meanwhile for Jens Lachmund, an extended discussion of urban gardening practices led to a focus on the production of public space as material, and rights to the city. In doing so, he highlighted a deep socio-materiality on the ways in which engagement with public space is culturally framed and enacted both by participants and policy-makers e.g., the differentiation between the terms “community member” in the UK and “citizen” in Germany.

Whilst there were far more nuanced discussions in our track, the three underlying themes and questions raised provided ample theoretical impetus for future collaboration. We synthesised the questions through fruitful discussion, however the timescale of the conference and the distraction of so many other great tracks to attend left the group with a great deal of promising work left to do. Exploring how material should be treated when researching social practices is a large question to address. Both arguments for the separation of social and material, and against it, in favour of mutually constitutional socio-material arrangements are valid. Future collaboration, no doubt drawing on a growing body of literature on post-humanism, will bear this out. Meanwhile, a more epistemologically driven question of where to locate the site of study when accessing practices in the flux of everyday life requires thoughtful expansion too. As the track talks demonstrate, research can be focussed on the moment of enactment of a practice, the ongoing maintenance of routine, or moments of disruption. The relative strengths and limitations of each remains to be drawn out in more depth. More importantly, a third question remains to be addressed on what to consider as material and on how to approach slippery materials such as web 2.0 applications. In this respect, the conference provided space for researchers focused on a succinct and similar topic that may not have collaborated or even entered dialogue otherwise. The track itself however, can take the conference as a starting point for more engaged dialogue and not as an end in itself. In this, both the conference and the track were a resounding success. 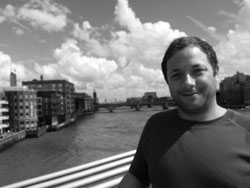 Matthew Hanchard is a part-time PhD Student in Sociology at Newcastle University. In his current research, Matthew applies social theories of practice to primary empirical findings on digital map engagement, and plans to develop a practice-orientated digital sociology of maps.