Through cross-research experiences the session opened analytical possibilities and countless interpretative gaze. In particular, the heterogeneity of the opening panel aroused various reflections on the subjective dimension in the use and evolution of science and technology. The main research themes, but especially the conclusions of each work, concerned questions of ontological character: health, identity, happiness, sexuality, were the main themes and research areas in which the digitization of subjectivity seem to have helped in the relationship between people and the self. In sociological terms when we talk of digital subjectivity, we can refer to a more fluid form of organization and expression of the self and not an annihilation of subjectivity in the traditional sense (Jamieson, 2013). The technologies in this sense deconstruct our experience, but at the same time lend it a new nature. Over the last decade the growing possibilities of living in online worlds have continued to undermine and throw into question traditional anthropological conceptions of place-based ethnography (Whitehead and Wesch, 2012). The increase of the possibility to live in the online world and the digital raises the question about new ways of living together and moreover, how to study this new way of being in the world that is taking shape. How does sociology, anthropology and social sciences grasp these movements based essentially on a concept of human being and of society that escape a traditional way to frame them? Everything is “simultaneously real, social, and narrated” (Latour 1993, p.7) but how does an ethnography of both the “unhuman” and the “digital” lead to exciting possibilities to reconfigure the notion of what is human? (Whitehead and Wesch, 2012). It seems necessary to reconfigure the notion of the human being in the light of the digital space and digitization of life, from a heuristic perspective for scientists regarding new possibilities of living in society. In this sense, the digitization of some aspects of life might suggest a drift of the chaotic post-human, but in fact a broader perspective could imagine a liberation from capitalist hegemonic conception of what we believe is human. The numerous areas of daily life that are digitized, suggests that somehow this process extends the meaning of what is human. While this takes many guises, it generally falls into a distinction of technology in some way enslaving people, or technology extending what it means to be human (Arthur 2010). Is it possible, therefore, to realize the importance of new interpretative sources that attend to technologies that become part of the daily life, with all their limitations and potentials. The effort of this contribution will be to explore other areas of human and social life that are affected by digitalization that become an element of metamorphosis that involves more aspects and offers opportunities and risks. These were discussed in the main contributions and concerned the exploration of three areas; health, happiness and sexuality.

New frontiers of health: mHealth and self management of disease

The main contributions addressed the digitization of health and suggested that the experience of illness is effectively changing. The most discussed issues were self management, patient empowerment, and management accountability through the use of digital platforms. In particular the contribution of Benjamin Marent Entitled ‘Digital technologies and the reconfiguration of health experiences and practices’ highlighted, in an interesting study on the implementation of mobile health (mHealth) platform to enable self-management of HIV in patients, that there is effectively a certain degree of empowerment, but that leads to increased individual responsibility for health. The patient is not responsible just for his or her care, but also for the accuracy of data to be useful for the supervision of the disease (Bruni, Rizzi, 2013). The self-monitoring can foster a greater awareness of their own health, but is accompanied by a reductionist understanding of health. In addition, the health risks that could arise from incorrect measurements of their parameters are significant. In the contribution presented, the patients in the trial are wondering about the correct way to use the mobile app and do not give up the opinion of the doctor. This may lead to reflection on how to integrate doctor and new e-health technologies. The key issue for the development of e-health is the emergence of new means of communication, enabling health professionals, institutions, patients and the general public to remain permanently connected (Kivits, 2013). The contribution entitled ‘Self-management and quantified-self: how diabetes apps foster monitoring’ by Barbara Morsello and Veronica Moretti focused on the study of the app for the management of type 1 diabetes, emphasized how the services available with these apps, such as the insulin calculator, may lead to an incorrect or inappropriate dose recommendation or the power of influencing other patients expecially young, starting with blood-tracking practices. These apps are often designed with levels of gramification that allow you to experience the management and monitoring as a pleasant experience and to share it with others. Infact an aspect of the field of e-health relates to virtual health. Virtual health refers to the possibility of a new body surpassing its physical aptitudes and limits in order to gain new competencies in a ‘cyberspace’ as a ‘superhuman’ evolving in a virtual world (Kivits, 2013). We conclude that digital care innovations facilitate the tracking of healthcare practices and the potential of the mHealth platform for self-management in everyday practices and organisational routines should not be overlooked.

Emotional quantification: happyness as a measure of progress

A very interesting presentation entitled ‘Happiness as a Measure of Progress: Digital tools of policy making’ by Anat Noa Fanti explored the consequences, but mostly the findings, raised from the analysis of happiness and well-being indicators used in various global contexts. The author’s perspective started from the historical and cultural analysis of the concept of happiness, to reach the conclusion that emotions are measured as any dimension of modern life such as productivity, the country’s political life, health and so on. The statistical measurement can be seen as a form of management and control of the western population by their governments. Happiness in his new aggregate form, away from subjective emotion, suffers a cultural shift: it becomes something understandable, explicable in terms of cause and effect, and therefore measurable. Hence the happiness rate of a country can be measured, it can become developable through creating the conditions through indicators that governments deem reliable. Happiness and its indexing makes the different countries comparable in some way and thus places them on a scale, from least to most happy. Happiness is no longer within the country and citizens, but it becomes something external, to ‘objectively’ measure. The fascinating point of this discussion concerns the risks that this indicator of happiness and well-being could become a new way to regulate the self and the subjectivity of citizens, taking with it the latent imposition of new standards and desirable models.

Technology is therefore not neutral because it is an expression of human being (Savat 2013). The technologies are anthropomorphic and reproduce our action, which is always based on values. The social world that we produce is the mirror of virtual environments we inhabit, and we form with our intervention. In this way we can support that online is the link between our being and our doing or, rather, it is the expression of our being as doing (Poster et al, 2009). The contribution of Patrick Keilty entitled ‘Digital Subjects in the Graphical Interface of Pornography’ intended precisely to grasp the dimension of values in the construction of digital subjects of graphical interfaces of online pornography websites. The development of graphical interfaces is essentially based on the maximization of pleasure, , through a stereotypical vision of the user and his needs. This stereotype guides the construction of the online environments that are based on users, in a perspective of costs and benefits. It would be desirable however to try to return to the user a safe space, a dwelling in which the person can seek refuge, but instead often these spaces seem more established as a transit user space rather than the person. The author uses the case of pornographic sites to highlight the need to establish the online space as a continuation of the physical space of relations without losing sight of the human dimension.

Health, emotions, digital spaces, are just some examples through which it was possible to talk about the forms of life that become digital and the importance of discovering and exploring new forms of this process. Technology expresses how we live our daily existence and how we organize ourselves, in terms of both our relations to one another and the sorts of subjects we constitute ourselves as (Deleuze 1992). All of our human and sensory experiences are compared with the digital today: the sense of time and space that are the pillars of our primordial feel, according to the German philosopher Immanuel Kant considered as the pure forms of intuition, which are influenced today by digital. The depersonalization of space, the reification of time, the opportunity to live differently in the space and the time (Giddens 1994) are all witnesses to the fact that the basis of human experience is our mode of connecting the human form to digital in particular in so called ‘advanced societies’. The digital influences capabilities and human actions causing the multiplication of the problems of coexistence, but at the same time establishing itself as opportunities and abilities to solve problems and create new possibilities in many fields such as medicine, communication, mobility, new media, etc.

Basically what we define as subjectivity, identity, self, is the result of particular cultural and social contexts products in certain circumstances. Therefore it is now more urgent than ever to rediscover the human data inside digitization and focus on the risks of appropriation and manipulation of data, institutional manipulation and irresponsibility by the the political system towards the social actor and its subjectivity.

Arthur B.W. (2010) The Nature of Technology: What It Is and How It Evolves, London: Penguin Books

Latour B., (1993) We Have Never Been Modern, Harvard University Press 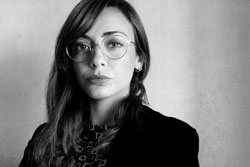 Barbara Morsello is in the second year of her PhD in Social Research at the University of Rome Tre. She is currently working at the National Institute for Cancer Treatment and Research of Rome, on the topic of care and treatment at the Reconstructive Surgery Department. She was also involved in research on the e-health, online community, urban studies on environmental disasters. Her main research interests include health, medicine and ICT.