As a brand new PhD graduate, one month after the defence, I approached my first joint 4S/EASST meeting with a twofold feeling: the need to start reflecting seriously upon my doctoral research on the one hand, and a blend of curiosity and anxiety generated by the key question ‘what’s next?’ on the other. These two dispositions required me both to look back at the work done and to look ahead to find out job opportunities inside or outside of academia. In hindsight, I realized I tackled these interrelated preoccupations by attending two moments of the conference, that is the postgraduate workshop and the track titled “Considering the performativity of our own research practices” wherein I presented a contribution. I found my condition of “in-between-ness” (Anzaldúa, 1987), that of not being a PhD candidate anymore and the one of yet-to-being something else, interestingly depicted during these two different moments of the conference. They have both confronted the challenging motto of the meeting — “Science and technology by other means” — by calling into question not just the non-traditional experiences and practices where science and technology are performed, but mainly the “other means” by which STS deals with its own epistemic practices. Indeed, the doctoral workshop invited graduate, postgraduate, and early-career scholars to reflect collaboratively upon new and unconventional research practices, publishing options, and careers. On the other hand, the track 014 — chaired by Juliane Jarke, Lisa Wood, and Lucas Introna — wherein I was involved has aimed at discussing the performative conditions of STS scholars’ research practices by drawing upon Karen Barad’s powerful concept of ‘ethico-onto-epistemology’ (Barad, 2007). These two happenings, therefore, have characterized my first experience at the 4S/EASST conference by sharing a common overarching inquiry: how do we (as junior and seasoned scholars) do STS studies “by other means”?

Such tricky question brings up the ethical and political implications of epistemological and methodological practices, an issue that goes beyond the popular debates around reflexivity and representationalism in STS (Woolgar, 1988). The postgraduate workshop saw PhD students, postgraduate and early-career scholars engaged in discussions on how to do research by other means, that is to say how to account for our own research practices carried out outside of conventional academic borders (art, architecture, design) and how to disentangle the complex relationships between the researcher and the worlds they contribute to enact. This discussion brought to the fore the methological question of how to tell different stories, explore different ways of knowledge transmission, and what are the contexts that allow us to do research by other means, expanding the range of methods we already employ.

A widespread criticism of the academic habitus (Bourdieu, 1988) combined with lively ideas on how to look at the future characterized the sessions on publishing practices and career opportunities. We discussed our experiences and challenges regarding writing research and publishing through conventional and unconventional channels. We discovered that many of us run or ran a blog to tease ideas out and that, in turn, such use of writing to shapes who we are as researchers. Some of us agree that traditional academic products — of which the conventional paper is the quintessence — and the system of peer-reviewing serve more to reproduce disciplinary standards of knowledge and conformity within the university rather than to bring about an effective impact on the world they assume to get to know. This concern nicely resonates with Geoffrey Bowker’s critique of the linear thinking and narrative conveyed by the scientific paper, whose data would often be known by the average citizen without doing any research (Bowker, 2014).

The reluctance to conform with the academic habitus — “I don’t want to be an academic. I want to be a person who gets to work in academia” —, the encouragement not to compromise our interests and the way we do theory along with practical advices such as “learn how to write funding proposals” marked the concluding moments of the workshop. For someone like me, who was looking for new perspectives and motivations to pursue a career in research, the postgraduate meeting has been an inspiring experience not just for the stories, challenges, joys and concerns I shared with my peers (see Figure 1), but because the idea itself of organizing a pre-conference workshop in which to discuss an alternative set of logics and values has been a successful attempt to put those very alternative logics and values into practice (Erickson et al., 2016).

With a reinvigorated spirit, I left the Hangar where the workshop was held to reach the International Convention Centre for the conference opening. I got to my track, scheduled throughout the last day of the conference, with the idea that the insights emerged during the workshop would have bounced back during the four sessions dedicated the discussion of the ethical, ontological and epistemological implications of STS research practices. After all, I tackled both the situations with the same concerns: to reflect on the ethico-onto-epistemic challenges of my doctoral research on the one hand, and to come across other research and researchers with whom I seemingly shared the same experiences and research interests.

As hinted, the track invited contributions relating to the performative conditions of methods and methodology in STS, the entanglement of subjects and objects in research, the enactments performed by epistemic practices and their relationship with everyday practices. The papers presented had both theoretical and empirical orientations, and covered a wide range of topics: a theoretical discussion around a posthumanist in social sciences, the critical issues raised by autoethnographic accounts, the implications of praxiography, diffraction in practice and as practice, touching as method, ethico-onto-epistemological commitments of and for sociomaterial research, and the process of writing research as ethico-onto-epistemic practice.

The concept of ‘ethico-onto-epistemology’ that inspired the track has been developed by Barad rejects the ontological separation between object of observation, instruments of observation and observer, to suggest that the materialization of reality depends on different entanglements between subjects, matter and meanings. This means that there is not a reality “out there” to be scrutinized and described, but ongoing (re)configurations of concepts, methods, human and non-human agencies. Drawing primarily upon Barad’s call for ethico-onto-epistemology, the track invited to appreciate the intertwinement of ethics, knowing and becoming that nurture any research enterprise by highlighting the generative and ontological character of methods. Considering this, the tracks aimed at exploring the ways we can perform STS “by other means”, actively and creatively participating in the enactment of the world trough research methods.

Similar concerns have inevitably challenged conventional forms of knowing, resonating with the critical issues teased out during the doctoral workshop. For example, Lisa Wood discussed the limits of the acceptability of the personal experience in research accounts by presenting both a traditional ethnographic and an autoethnographic account relating to medical visualization practices. Her argument pointed to the recurrent beliefs that consider autoethnography as lacking in rigor or as “sloppy sociology” by criteria such as ‘reliability’, ‘generalizability’ and ‘credibility’. This made me wonder: if hierarchies of knowledge still stand, what do they serve to? Who is interested in holding such perceptions of methods and why? This issue reminds me to what John Law has called ‘normativity of method’, that is to say the hegemonic pretensions of certain versions or accounts of method. It follows a call for a “slow, vulnerable, quiet, multiple, modest, uncertain, and diverse” method in social science (Law, 2004). Along similar lines, Eva Svedmark’s talk pointed to the case of doing “uncomfortable science” such as that of studying digital narratives and self-disclosure online practices related to suicide, self-harm, and mental illness. Drawing upon feminist tecnoscience and posthuman theory, Svedmark suggested touch as method within ethico-onto-epistemology. She explained how she got in touch with the research material through the body, emotions and technologies, a sociomaterial configuration that — Svedmark explained — enabled to articulate and enact phenomena rather than to capture data. In this respect, she drew on Donna Haraway’s work to emphasize the ethical challenges posed by “what stories make worlds and what worlds make stories” (Haraway, 2011), an argument that resonated quite interesting with postgraduate workshop’s remark about the need to tell different stories.

Finally, I would like to mention Lucas Introna’s reflections on performative epistemic practices. Here, I am particularly interested in his stressing the importance of the adverb ‘seriously’ contained in the track’s pivotal question “What happens if we take Barad’s call for ethico-onto-epistemology seriously?”. The presence of this modifier is anything but trivial inasmuch as, according to Introna, we do not take alternative research practices seriously because we are into regimes of truth. As a matter of fact, he argued that there are many scholars in STS that claim to use the theoretical apparatus of the ontology of becoming, but still present their research methodology — collecting, ordering, and describing — and enact their epistemic practices in the language of the representational paradigm. When I raised a question about the power differentials between epistemic practices and research fields and the consequent difficult to conceive of and carry out alternative research practices, he acknowledged the issue, but still his claim was clear and simple: “the point is that we don’t do that. So let’s do it! 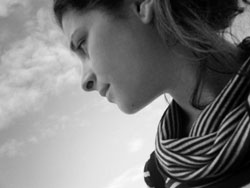 Mariacristina Sciannamblo holds a PhD in Sociology and Applied Social Sciences from University of Rome Sapienza. Her dissertation work focuses on gender and feminist critique of Information Technology (IT). Her research interests concern Science and Technology Studies, gender and feminist studies of technoscience, media and cultural studies, politics of IT, and discourses around methods. Since November 2016 she is a postdoctoral fellow at Madeira Interactive Technologies Institute.