The frame of a study shapes the portrait of a technology

A popular proverb advises against judging a fish by its ability to climb a tree. Otherwise, the ill application of judgemental criteria leads to frustration in the subject under scrutiny. By the same account, the ‘Biography of Artefacts and Practices’ (BOAP) perspective reminds us not to judge a technology’s capacity by its efficacy over a limited period of time and in a limited space. Doing so leads to frustration in scholars with interest in longitudinal analysis of technology.

The biographical perspective is a recent development that addresses limitations observed in conventional studies of technology. The frustration about limited generalisations informed by narrowly scoped technology studies is one intellectual origin of the biographical lens on technology. Three decades of observation of technological advances in the field of manufacturing information systems revealed ephemeral generalisations as produced by isolated, single-sited studies often framed as implementation or snapshot studies (Pollock & Williams, 2009). Another strand of biographical studies seeks for the systematised analysis of practices related to the development and use of technology. Practices of individuals and groups of actors are interlinked with technological development and therefore are also subject to change over time (Hyysalo, 2010).

Analysts of the BOAP perspective acknowledge that changes in the shape and form of a technology are contingent to non-linear and, at times, chaotic innovation processes that unfold over extended periods of time. They argue for a transdisciplinary framing of research problems and the acknowledgement of the many influences on the shaping of a technology. The perspective challenges students of technology to remain flexible in their assumptions about the diversity of players engaged in the development and use of a technological artefact and the timescales and speeds in which these practices unfold.

Beyond the single-site study

The track “Beyond the single-site study: the Biography of Artefacts and Practices” brought together an international community of scholars asking questions that reach beyond frames of popular research designs. From the 15 talks presented at this track we learn that the BOAP perspective is an active and growing field of research. The diversity of the studies presented indicates that the biographical lens applies to different research settings ranging from individual doctoral research studies to longitudinal research projects. Four main themes emerged across the talks in this track.

The first theme sheds lights on intermediary actors and, generally, the changing roles of actors in different stages of technological development. For example, in previous studies of enterprise resource planning systems, industry analysts have emerged as a growing influence on the shaping of both markets and products. The results of a longitudinal analysis of how industry analysts work and shape expectations in markets has been presented by Pollock and Williams (2015). Another set of longitudinal studies explored how the changing demographics of users prompted technology suppliers to reinvent their strategies to engage with their user base (Johnson et al., 2012). Emphasising a diversified perspective on actors, the biographical perspective offers an alternative approach to challenge established notions of the user-supplier relation. For example, one work-in-progress study applied this more nuanced perspective on the user-supplier relation and investigated novel forms of interactions between actor groups.

The second theme was characterised by a broader perspective on dynamics that operate across individual organisations and affect entire markets. While industry analysts have been identified as one group of influential actors outside the traditional user-supplier nexus, policy makers also continue to play a role in driving expectations about technological developments. A longitudinal investigation of information systems in hospitals showed for instance how policy incentives drove the premature purchase of immature products in an immature market (Mozaffar et al., 2014).

Thirdly, subjecting individual organisations to long-term investigation reveals the entanglement of biographies of artefacts and practices beyond single sites. Studies of both an engineering firm and a research organisation reported how internal developments and external influences shifted repeatedly the main foci of practices that internal actor groups engaged with. Adapting practices as external factors and dynamics change, can be a strategy for organisations, especially those that depend on external funding bodies to sustain operations over multiple decades (Ribes & Polk, 2015).

A fourth theme in the BOAP track also examined individual organisations but touched upon ontological questions. Cases from the automobile industry and digital economy illustrated how common concepts of networks and systems are limited in their capacity to explain dynamics that play out over extended timescales and multiple sites. Drawing inspiration from biological studies, ecological metaphors are explored to develop novel concepts that fit demanding requirements of biographical observations (Wiegel, 2016). Other talks that have not been categorised above examined further research themes including risks in infrastructures, clusters of innovation and philosophical works contributing to biographical thinking.

Each study presented faced a different set of challenges, and it was giving valuable insights to share specifics about the different approaches chosen to deal with a variety of obstacles in the research process. This was especially helpful for early career researchers who are in the process of plotting the direction of their future research activities. Equally, it was helpful for experienced analysts of the biographical perspective to see how their conceptualisations are being incorporated in other works. For example, some leading scholars are preparing a joint contribution to elaborate the core principles of the BOAP perspective. Discussions with other track participants enabled evaluation of the trajectory of current developments and informed strategies for articulating outlines for further research activities.

For a growing community it is important to come together to learn about and from each other and to jointly develop strategies to advance the field. The context of an international conference is also a welcome opportunity to explore subjects outside one’s field. The presentations in the track “Emerging ‘forms’ of life”, at first, appeared only remotely related to the biographical study of technology. In reality, the thought-provoking contents of this track resonated strongly with BOAP. The final section will reflect on how debates about definitions of ‘life’ indicate that, metaphorically speaking, biographies of humans have more similarities with biographies of artefacts and practices than commonly assumed.

Birth is not the beginning: biological origins are as opaque as artefactual origins

We invoke metaphors to reduce the complexity of phenomena under investigation by relating them to more commonly understood concepts. Such metaphors can be helpful in producing understanding and convey meaning. Applying the metaphor of biography in the context of technological development invokes an image of a long journey with numerous decision points where choices determine the future shaping of an evolving entity.

At the same time, metaphors can limit our capacity to analyse and grasp a phenomenon through the introduction of analytical limitations. A metaphor from one domain can fail to describe the unique features of another domain.

The biological origins of the metaphor of biography attach certain limits to its appropriation in a technological domain. There is no singular and naturally occurring event marking the birth of a technology – although there is such a thing in a rhetorical manner. However, birth itself is not the beginning of a biological organism, but a convenient starting point for a biographical narrative as one was reminded when attending the track “Emerging ‘forms’ of life”. The speakers in this track explored the challenges of defining the term ‘life’. What does life mean in an extraterrestrial setting? How can we find life on Mars if there is no clear definition of what life is? And what does human life mean in context of in vitro maturation of embryos? Exploring the question of ‘when is human life’ reveals a range of philosophical and ethical issues. These issues need attention in the attempt to produce a definition of the term life. For instance, in a blogpost on a website of a scientific publisher, a geneticist identifies 17 time points that could mark the beginning of human life – chronologically, the exemplary illustration in figure 1 depicts time point 4 in case of an animal embryo, birth comes only at time point 15 (Lewis, 2013). Faced with complexities introduced by advances in reproductive technologies, the geneticist declares,“[u]ntil an artificial uterus becomes a reality, technology defines, for me, when a human life begins, rather than biology”.

Consequently, and although some qualitative features of organic life differ substantially from those of a technical artefact, there are other features that show surprising similarities. The evolutionary journeys of humans and artefacts begin way before they are either naturally or rhetorically exposed to public life. And these journeys continue long after the moment of first exposure. The meaning of a biography, no matter if human or not, is determined by the accumulation of events along these journeys.

As such, the biological metaphor of biography offers much to technology studies, but maybe there are also a few lessons that biographers of artefacts and practices can offer to biologists interested in defining ‘life’. At least we can state with confidence that meaningful insights cannot be generated by examining only single sites over short periods of time and sticking to narrow methodological conventions of individual disciplines.

Pollock N & Williams R (2009) Software and Organisations: The biography of the enterprise-wide system or how SAP conquered the world. New York: Routledge.

Wiegel V (2016) Biographies of an innovation: an ecological analysis of a strategic technology project in the auto-industry. PhD Thesis, University of Edinburgh, UK. 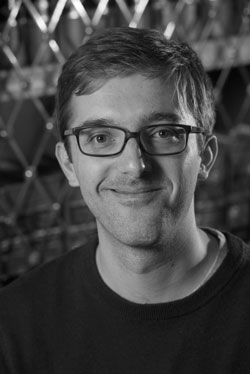 Valeri is a research fellow in the Centre for Medical Informatics in the Medical School at the University of Edinburgh where he is researching the deployment and appropriation of information systems in clinical settings. His interest in exploring the long stories of technological development and use stems from the long-term exposure to industrial research and the ecological analysis of corporate innovation processes in his PhD thesis.