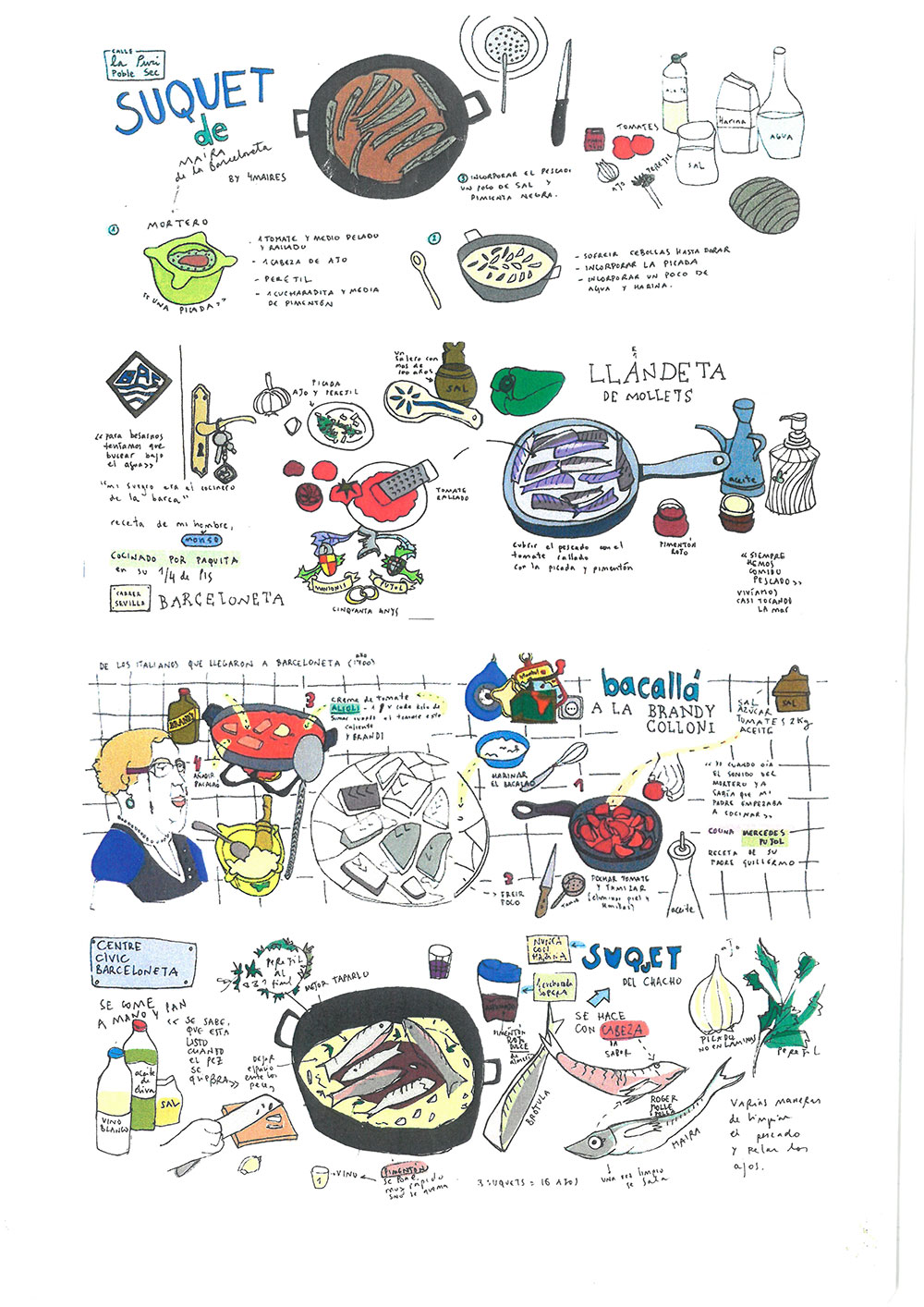 The postgraduate workshop at 4S/EASST 2016 kicked off with a special meal: in the stevedore’s trade union club in the Barceloneta neighbourhood, we enjoyed fish caught by local fishermen with a range of side dishes, all prepared from old recipes, which were compiled in a book with illustrations by Carla Boserman. Dinners such as this have been organised regularly by Marina Monsonís, in order to preserve local food cultures and share histories of the Barceloneta area, which has been rapidly gentrified. While we dined, Marina’s father Marti, a former stevedore himself, spoke of the collective organising that happened during crackdowns on the stevedore’s union. When some members were being punished for participating in a strike by having their wages withheld, the group agreed that their members’ wages would be pooled and shared among all of them. Marti reminded us of these simple but effective tactics and urged us: “If you have the idea, you’re together, and you’re organised — you can do it.” I later found that an article, first published in the Workers Solidarity Alliance magazine Ideas & Action in 1989 by Don Fitz, quoted a statement from the Organización de Estibadores Portuarios de Barcelona (OEPB), the group whose club I had visited to eat local food and hear local stories. This statement reads, in part:

“To hand over our proletarian responsibility to representatives is to throw away our need as a class to participate in social transformation. We realized that we would never arrive at the social revolution through leaders or liberators. Those caught up in and distracted by the obligations of their positions and the representative function they flaunt end up distancing themselves from those they represent. As they are not affected by the same problems, troubles or struggles, they end up almost unable to recognize them. The estrangement is inevitable.”

This notion that we will “never arrive at the social revolution through leaders or liberators” is reflected in a pervasive anti-heroic turn, which ran through several presentations and informal conversations at 4S/EASST. 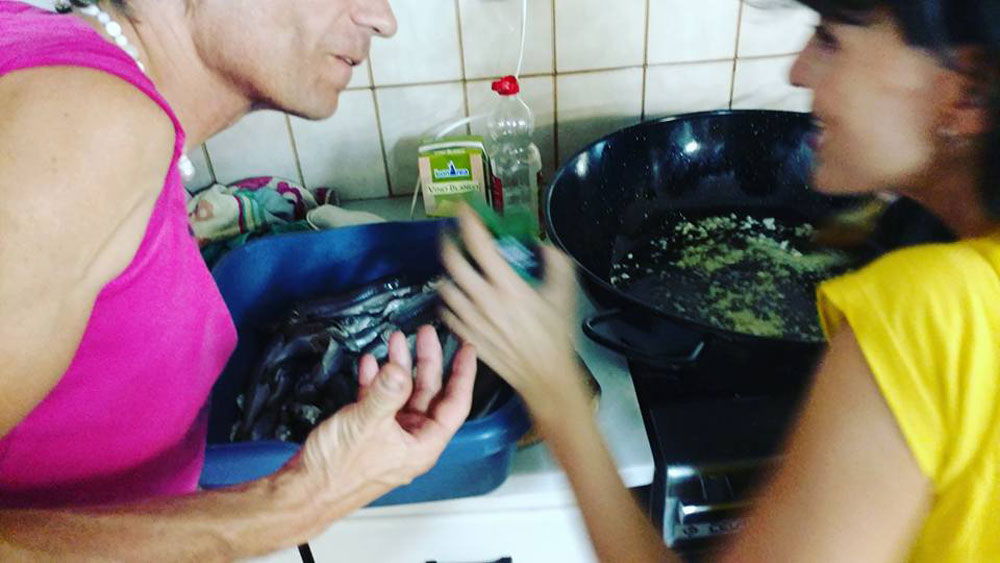 In the “Counting By Other Means” track, Katrina Jungnickel touched on this turn while presenting her paper “Making inventions count: the gender politics of design patents”. As she presented her work about female innovators, who were part of a wave of patent registrations in the UK during the 1880s, she noted how inventions were previously often credited to fathers, husbands, or brothers. Women were finally permitted to register patents under their own names and they came forward to do so in significant numbers, particularly for inventions related to cycling wear. (Jungnickel 2016) Mentioning she was working on a manuscript featuring some of these women and their patent filings, Jungnickel described herself as being wary of over-heroicising these women. This drive to fill in more accurate detail in the historical record should not, it was implied, necessarily swing to the other direction of creating overly promotional narratives about these women.

To briefly mention a different example, in a forthcoming piece, Jungnickel also reflects on her previous research, particularly with a community Wi-Fi group in Adelaide, as having a “a DIY ethic but they were not doing it alone—they were Doing-It-Together.” (Jungnickel, forthcoming) While investigating collective groups and their workings (the Wi-Fi group) is not the same as investigating a group of people who were performing the same activity contemporaneously (the female patent claimants), in both cases it’s clear that nominating one person as the representative case or protagonist vastly truncates the possible nuances to the history. She also notes in this manuscript that in the search for an (often male) hero to be assigned credit, we miss out on the more complex stories behind how things are invented and repurposed. Avoiding introducing or re-introducing women in the same, heroic and protagonist-centric manner as often happens but aiming for “rich, messy, and dynamic” (Jungnickel, forthcoming) storytelling is one antidote to the hero narrative.

Within another conference track, “Before/after/beyond breakdown: exploring regimes of maintenance”, Marisa Cohn contributed to the anti-heroic turn in her paper “Holding on and letting go – temporal regimes of infrastructure care work”. Her presentation explored the politics of engineering work (in particular, the maintenance of the hardware and software involved in a NASA-funded mission to Saturn of nearly forty years’ vintage) and how engineers positioned both their work and the objects of their concern (the code, the databases, the machines themselves, and so on) when speaking about their work to others. In one revealing example, Cohn quotes an engineer on the project describing the spacecraft as “a new machine”, since it has undergone so many fixes, adjustments, and changes to its component parts. By naming the machine new again, the work that the maintainers do can be presented in a different way – Cohn describes this process through an STS lens by referring to the notion of “infrastructural inversion” as described by Bowker. (Cohn 2016).

Though a “new machine”, the original producers of the spacecraft continued to receive credit for their work (whom I would call the “heroes” of the story) and the maintainers of the system got on with the job, sometimes appearing apologetic that the system creaked along in a patchwork way and that even nearly forty years later, new bugs surfaced. (Cohn 2016) Here, the hero narrative prevents recognition of essential work, which not only keeps the mission running, but effectively adjusts and changes the functionality of the machine. Cohn persuasively argues that the very notion of success needs to be reframed to allow the teams of maintainers their fair credit.

In both examples cited, the accepted hero narratives and success stories have much more nuance behind them. There is an urgency to adjusting our view of how success happens, how infrastructures are built, how social revolutions are won. Reflecting upon these presentations and conversations it also becomes clear that the very task of continuously dismantling our propensity to assign a leader or give credit to a hero is in itself a kind of essential maintenance work. As academics in STS, we can easily appreciate that this kind of maintenance work to the narratives of science and technology is of key importance – not just for our field, but for science communication in general. 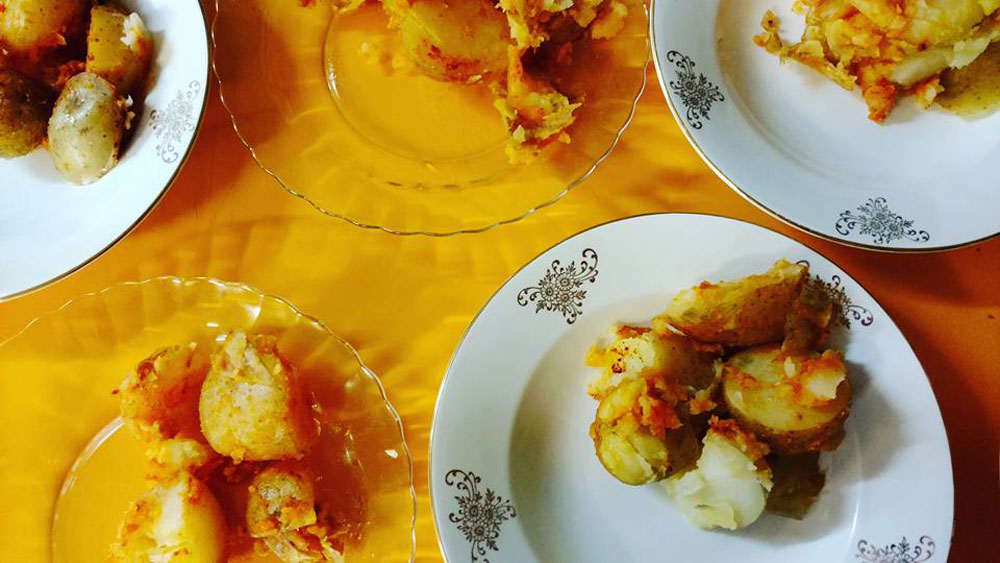