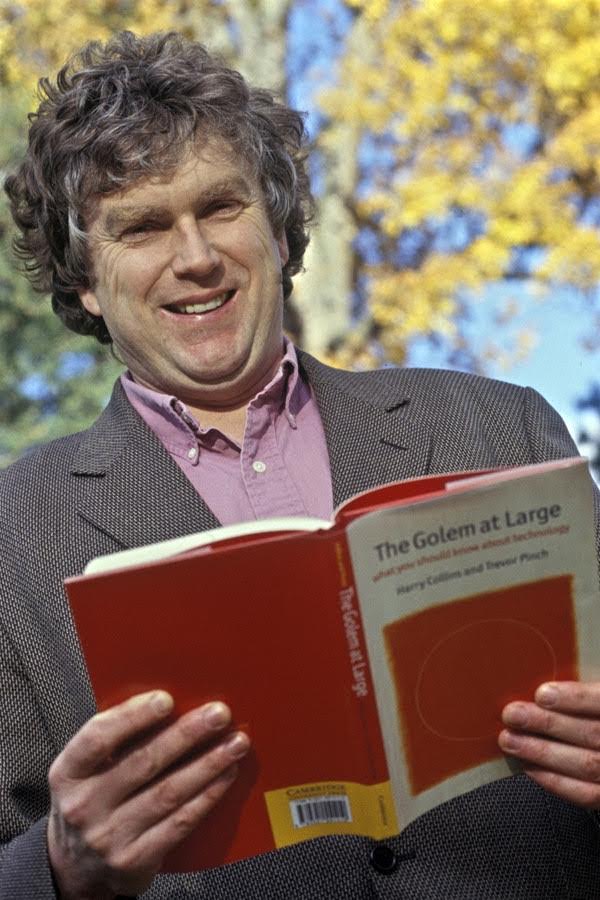 Trevor Pinch has been immensely important to the field of science and technology studies, and way beyond. Not just by his impressive range and quality of publications, but because Trevor was life itself. Such a creative mind and lucid writer, his emails were always sparkling with energy, full of humour and exclamation marks. Evenings with Trevor, at dinners in the margins of workshops and conferences, were cheerful as the colourful stories he had to tell. His scholarship was genuinely collaborative. It was about enthusiastically sharing ideas, books, music and links, and a seemingly endless stream of ideas he found inspiring. To us, Trevor embodied the ideal colleague.

Trevor Pinch was distinguished Goldwin Smith Professor of Science & Technology Studies and Professor of Sociology at Cornell University, Ithaca, NY. He has been especially known for his prominent roles in establishing the scholarly fields of social studies of technology and sound studies. But he did much more. He started his science studies career with Harry Collins in Bath, UK, with studies of parapsychology and neutrino detection (Collins and Pinch 1982, Pinch 1986).1 His anthropological study of market traders was sold in airport bookshops (Clark and Pinch 1995). And an even larger readership he reached with the book series The Golem: What Everyone Should Know About Science, Technology and Medicine, written together with Harry Collins (Collins and Pinch 1993 (1998), Collins and Pinch 1998, Collins and Pinch 2005). This 3-volume series has been translated into 12 other languages. And then he played a self-built analogue synthesizer in the Electric Golem band, which earned him yet another audience in clubs in Ithaca and New York and on Spotify.

In 1981, Trevor attended the very first EASST conference in the Burg Deutschlandsberg, near Graz in Austria. He presented his work on the detection of solar neutrino’s, resulting from his PhD research in Bath. That PhD project was almost finished, and Trevor would soon be on the job market. Wiebe Bijker was at the same conference to present his first paper on “The Social Construction of Technology”. They met over dinner and in the bar, trying the local Schilcherfrizzante. At the end of this pink-champagne drinking, Trevor accepted a one-year postdoc position at Twente University, The Netherlands, where he started on January 4th, 1982. That collaboration between Trevor and Wiebe resulted in the paper “The Social Construction of Facts and Artifacts: or How the Sociology of Science and the Sociology of Technology might Benefit Each Other”, first presented in a Paris workshop in Autumn 1982, then at the annual 4S conference in 1983, and finally published in 1984 (Pinch and Bijker 1984). The acronym SCOT for the proposed new approach of a ‘social construction of technology’ was coined by David Edge, the Edinburgh-based editor of Social Studies of Science.

The presentations of this paper and the ensuing discussions made Trevor and Wiebe realize that there was a dormant interest within the science studies community to start investigating technologies. Hence, they decided to organize a workshop in Twente in 1983, to which, following Donald MacKenzie’s suggestion, they also invited historians of technology such as Thomas Hughes, Ruth Schwartz Cowan and Ed Constant. This resulted in an edited volume that among American students came to be called ‘the school bus book’, because of its yellow-black cover (Bijker, Hughes, and Pinch 2012 [1987]). That book spurred MIT Press to invite Trevor and Wiebe to start the book series ‘Inside Technology’, now counting almost 90 titles. Only 4 weeks before his death, Trevor wrote his last emails as editor of this series.2

After his postdoc at Twente University, Trevor became lecturer in sociology at the University of York. His interest in economic questions was spurred by the collaboration on the Health and Efficiency book with Malcolm Ashmore and Michael Mulkay (Ashmore, Mulkay, and Pinch 1989). Later, in 2008, he followed this interest in developing an economic sociology cum STS perspective in his collaboration with Richard Svedberg (Pinch and Svedberg 2008). In 1990, Trevor moved to Cornell University, where he joined Sheila Jasanoff and helped to create the Department of Science and Technology Studies. Trevor became a full professor in 1994. He served as chair of that Department for eight years. Among his many contributions to STS in those and the following years was the widely cited volume How Users Matter: The Co-construction of Users and Technology, co-edited with Nelly Oudshoorn (Oudshoorn and Pinch 2003).

Trevor’s pioneering role in sound studies resulted from his combined love for building a synthesizer, playing it and doing science and technology studies. His first presentations about music and technology focused on the early days of the synthesizer and culminated in the wonderfully written Analog Days: The Invention and Impact of the Moog synthesizer (Pinch and Trocco 2002). Some of his earlier interests, like that in markets, returned in his examination of the sales techniques—and the boundary shifting between the world of engineering and music involved—that Bob Moog used to pitch his synthesizers as musical instruments to wide audiences. Yet Trevor also showed how the synthesizer’s sound tuned in with the psychedelic technologies of light shows and drugs in the spirit of the 1960s. Analog Days became a Harvard UP bestseller. Yet what Trevor seemed to appreciate most in the success of the book was how it brought him new contacts in the music world that otherwise would probably not have been available to him.

While finalizing Analog Days, Trevor began preparing the special issue “Sound Studies” for Social Studies of Science with Karin Bijsterveld, arguing that the dramatic socio-technical shifts in the production and consumption of music since the 1950s, and the emerging reflection on how machines, soundscapes and listening practices intersected, made sound and listening matter for STS (Bijsterveld and Pinch 2004). Ever since, sound definitely mattered to him, leading up to the publication of the Oxford Handbook of Sound Studies, again with Karin (Pinch and Bijsterveld 2012). It was very “Trevorish” that he was only prepared to accept the invitation for that Handbook if the book would be allowed to be more than just stocktaking. After all, Trevor always kept reading the newest ‘stuff.’ Instead of summarizing existing sound studies’ work, he aimed at making a volume that would show the newest directions in the field. To him, unsurprisingly perhaps, many of these new directions closely aligned with science and technology studies.

Trevor Pinch was a prolific writer, authoring and editing 16 books and more than 80 scholarly articles, to which we can do no full justice here. He has been visiting professor to more than 10 universities, from Denmark to Korea and including Maastricht. He has also fulfilled all possible roles of intellectual leadership in the international scientific community. On top of doing his work for the MIT series, he acted as one of the co-editors of the first edition of the STS Handbook (Jasanoff et al. 1995), and served as 4S president (2012-2013).

He genuinely loved teaching. No matter how many prizes and distinctions he was awarded—such as that of honorary doctor at Maastricht University (2013) or the 4S John Desmond Bernal Prize for distinguished contributions to the social studies of science (2018)—he never turned into the type of senior that has ‘been there, done that.’ In 1992, Trevor returned from a conference in Germany and excitedly reported that someone had come up to him to inquire whether “this paper is from your PhD project? When will you be finished?” — for Trevor, no bigger compliment for his research than being compared with a young PhD student. He remained curious to hear which new topics students examined, which technologies they used, and which musical subcultures they co-constructed. In that sense, he kept surrounding himself with the social life that constituted science, technology and sound—and he kept teaching about this until well into the Fall of 2021.

Trevor Pinch is survived by his longtime partner, Christine Leuenberger, senior lecturer in STS, and his daughters, Benika and Annika.

2 For more details about the workshop, the first edited volume and the book series, see the introductions to the anniversary edition (Bijker, Hughes, and Pinch 2012 [1987]).

Collins, Harry, and Trevor Pinch. 1998. The golem at large: what you should know about technology. Cambridge: Cambridge University Press.