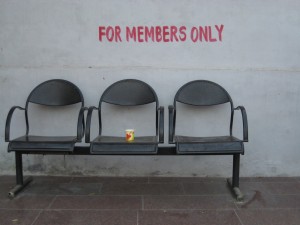 Editorial – For Members Only? by Ignacio Farías

This note reports on the workshop “Markets for Collective Concerns? held at Copenhagen Business School last December. The discussions at the workshop focused mostly on two issues: first, markets developed as policy instruments and their failures and, second, new types of expertise developed to evaluate and repair rkets enacted to deal with collective concerns. In this text, we briefly discuss some of the possible consequences of these discussions on future STS inspired studies of markets.

We assembled a diverse research community in a workshop discussing the various ways in which STS can inspire urban (planning) studies. This diversity was not only reflected in the variety of concepts and methodologies used, but also in discussions around issues of defining the city. Consensus, however, prevailed, at least on the notion of a city not as a stable and bounded entity but as a multiple and relational object enacted at specific sites. Although conceptually compelling, several challenges as to how to operationalize this understanding methodologically were encountered. Overall, the workshop made no attempt to discipline research or categorize issues but proposed to study the multiple trajectories of cities in the making.

This paper is a short reflection on ongoing transformations in knowledge production and building knowledge-making communities. Multiple EASST 2014 conference presentations addressed the effects of the recent move to large-scale programmatic research organization forms and increasing emphasis on inter- and transdisciplinarity. Several related trends emerged from the rich and interesting material presented during the conference: researchers increasingly working across different boundaries engage in making new identities; emerging communities are characterised by fluidity and indistinct membership; making and negotiating futures are becoming central to the emergence of and developments within technoscientific fields and communities. In this paper I map various challenges and open questions associated with these trends as articulated by the conference participants.

The workshop brought together STS and Media Studies scholars in order to discuss less developed similarities and differences between the two fields. Despite looking for connections, the workshop revealed some fundamental differences and some common biases in the mutual appreciation. This diversity also expressed the internal pluralism within the fields, which pointed to fruitful connections to be specifically tailored to theories, methods, and cases. These heterogeneous perspectives sparked a mutual interest in new ways of combining of STS and Media Studies.

Between Fashion and Storylines of Science, Technology and Innovation. Cross-Breeding STS and IS a Process Under Construction by Diana Velasco

Situating solidarities in the fields of Science and Technology Studies and Innovation Studies is a stimulating process not free from shortcomings. Inspired by my participation in the cross-breeding science and technology studies and innovation studies track of the EASST 2014 conference I reflect on the challenges and opportunities that such a process implies. Through the vibrant presentations we embarked on a journey that took us from the theoretical bases of both fields to their application on specific case studies. This paper comments on some of the papers presented as an empirical testimony of the feasibility of having a mongrel discipline.

Innovation and STS in Torun: The EASST Conference as a Generative Object by Robert Meckin

This article develops the notion of the EASST 2014 conference as a fire object by discussing its generative quality. This is employed as a device to retell the conference and produce points for discussion. The article focuses on the innovation tracks attended by the author in Torun and finds new and old concerns emerging from the presentations, discussions and interactions.